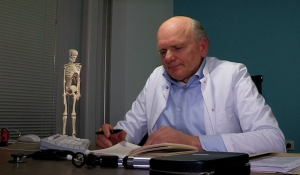 Dr Michel Mulder is a medical doctor, specialising in aviation medicine.  He served in Africa with Medcins Sans Frontières. There he was instrumental in organising a Hercules airlift, and caught the flying bug. Later, after qualifying as a pilot, Michel became a KLM pilot ending up on long-haul routes. “Destinations in Africa” says Michel “were my favourite, for which I volunteered.” When pilots are able to bid for their preferred routes, most select Los Angeles, Boston, New York, Sidney, etc, but he would ask for Africa, using his stopovers to help organise village cleanwater schemes. At the same time he continued to practise as an aeromedical examiner on his days off. He has now seen hundreds of aerotoxic cases. In 2012 he diagnosed Richard Westgate as suffering the severest effects of Aerotoxic Syndrome.

Since 2008 Dr Mulder was involved in numerous research projects and co-authored scientific studies and articles.