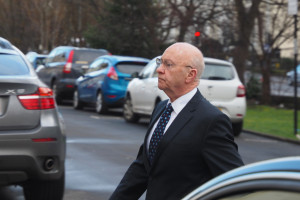 Aviation Lawyer Frank Cannon is a former pilot and was the owner of a small airline operating from Scotland. He became former British Airways pilot Richard Westgates lawyer in Spring of 2012 and his mandate lasted until early 2015.

He was also representing the Westgate case at the Senior Coroners Court at Bournemouth, UK until recently. As the Westgate family decided to start litigation in this matter the case is now handled by a different law firm against British Airways, the British Civil Aviation Authority (CAA) and the UK Department of Transport. These proceedings will be considerably delayed, thereby impacting a decision on the cause of death of Mr. Westgate and many other victims, who are still alive and want to pursue the issue in the Courts of Law.

Mr. Cannon has coordinated the different research teams around the world in this matter and is currently preparing litigation for around about 50 other victims, mainly flight crew but also some passengers.

After the broadcast of the WDR/ARD documentary “DIE STORY: Nervengift im Flugzeug – Was die Luftfahrtindustrie verschweigt” on 07.07.2014 which was originally authored by Tim van Beveren, who then learned a week prior to the broadcast from the press-department of German carrier Lufthansa that he was no longer the author of his film, Mr. Cannon filed an official program-complaint with the station.

Also Mr. Cannon became concerned about a possible “conflict of interest” with Mr. van Beveren’s assigned co-author, WDR editor Dr. Roman Rusch (aka. previously “Stumpf”). Parallel to his involvement as a co-author of the WDR documentary, Mr. Stumpf was studying “communications and networking” on a private, industry sponsored and affiliated university and did receive an industry funded sponsorship for this purpose. To media representatives and outlets Dr. Stumpf denied all allegations that his objectiveness would have been compromised by this construct.

The film version that was aired by ARD network on 07.07.2013 contained numerous wrong representations of facts and omitted many of the investigative research results and facts that Mr. van Beveren and his research team had collected in the process of their work.

Also some original protagonists were “edited out”. Others withdrew their consent to be broadcasted when they learned that Mr. van Beveren was no longer the editor and author of this film.

The most disturbing fact was a severe manipulation of an interview that had been originally been conducted by Mr. van Beveren with the scientist Prof. Dr. Mohamed Abou-Donia (where WDR editor Dr. Rusch was not present) and was later edited and presented in a way as if Dr. Rusch conducted this interview. By inserting a different than the originally  question asked by Mr. van Beveren now in German (and Dr. Rusch portrayed as the interviewer in the film) a statement of the scientist was presented in a wrong context and his answer was consequently not corresponding to the different question of Mr. Rusch. This is what the scientist had to say about such journalistic conduct:  Abou-Donia on WDR interview.

This and all correspondence (partially in German) in this matter can be found on an external blog site here.

Despite this unpleasant “intermezzo” we are very grateful to Mr. Cannon that he gave Mr. van Beveren and his team a second chance and the trust to complete the work van Beveren did already start when Mr. Westgate was still alive and in the way he intended it.